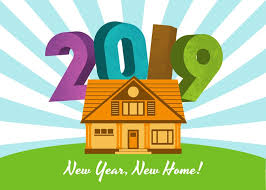 New Year provides the ideal opportunity to reflect on market activity during the year which has just finished and to ponder what might happen during the early months of the year to come.  Whilst there are many uncertainties at the moment one thing which will always remain certain is that people always have to live somewhere and that whatever the political state of affairs there will always be people who need to buy or sell.  South Devon remains a firm favourite for retirees as well as those looking for a change of lifestyle.  Bill Bye, director of Eric Lloyd & Co has just completed his annual review of his company’s performance during 2018 which shows that the residential property market in the firm’s areas of operation remains resilient. The average price of properties sold by Eric Lloyd & Co during the whole of 2018 shows an increase of just under 5% when compared with the average value of properties sold in 2017.  Whilst the number of sales in some of the earlier months of 2018 were slightly down, activity has picked up again during the last few months of the year, with the number of sales agreed during November and December being ahead of the same period in 2017 combined with a significantly higher number of completions taking place in October, November and December when compared with the same period in the previous year.  Bill commented that, “The recent increased activity levels bodes well for the start of 2019.  For anyone looking to sell in 2019, now is the time to ‘start the ball rolling’ to be ahead of the ‘spring rush’ in March and April.  Call our offices(01803 844466/852773) to arrange your free valuation.”